This
paper describes the integration of a real time wireless GPS/GIS system
with high end real time 3D computer graphics. It describes some of the
infrastructure required for such a system, and the work required for implementation.

A large
percentage of the worlds information is geographically based. Applications
such as the graphical APRS clients are a great way to view this data, but
the information although dynamic lacks impact. With this in mind, REZN8<![if !supportFootnotes]>[1]<![endif]>
and Radioactive Networks<![if !supportFootnotes]>[2]<![endif]>
joined forces to create a demonstration on how geographical based data
such as that from APRS could be rendered if combined with the fastest desktop
computing power, the fastest graphics cards and the latest 3D rendering
packages.
We are now to the point where realistic 3D graphics can be generated in real time on the desktop ñ and not just the graphics like those found in Doom or Quake but broadcast or film quality. This project was done using APRS as the base which all other technologies were added. The technology we are presenting here is quite intensive on animators and modelers at the moment, but developing technology should reduce the resources required.

In the outside world the way that information is presented to the user is paramount. If it were not, Linux would be the predominant desktop operating system and Windows would be a cute toy for hackers. Like most software of it’s type, all the APRS software under windows environments presents the information in 2D.
REZN8 wanted an application they could use to highlight their graphics expertise when integrated with the latest microprocessors and nVidia graphics cards. They decided that adding 3D graphics to APRS would be the ideal example of this expertise and technology.

Previously, REZN8 had produced a 3D model of Sydney for the Paralympic Marathon. This model had a line moving through the city growing as the athletes moved. This line extended at a constant speed and
had to be adjusted by hand as the race progressed. A photo of these graphics can be found in figure 1.

For this presentation we decided that extending this concept to the next level ñ
Adding live wireless GPS data for dynamic generation of graphics.

To give
the demonstration some appeal, we needed a gimmick ñ and the obvious gimmick
was with the object that we were tracking. After looking at a few options
we settled on childrenís scooters that have become popular recently.
We decided
to have two people race the scooters outside the venue of our demonstration,
whilst being tracked on a video screen inside. To make the race a little
more exciting, one of the contestants took a somewhat shorter alternate
route.
During
most of the race the only image shown was a live 3D representation. At
the end, closed circuit television was used to show that this was not faked.

GPS
was used to track the scooters. This was not ideal for low speed vehicles
in close proximity but it performed well enough.
In order
to operate flawlessly we had already chosen radio transmitters with a 50W
(max) power output so that we could gain range and cut through any interference
experienced.
This
was important as the original concept called for tracking cars over a larger
area where the power would be needed for the range.

The scooters
we ultimately decided to use for the demonstration were the larger battery
powered units. But with these units we had the problem of where to mount
the radio, GPS and controller. We found that if we removed the internal
battery, making the scooters self powered, we could mount most of the equipment
in the battery compartment.

We decided
to use Kenwood D-700 transmitters with integrated TNCís as they were tightly
integrated making them less likely to fail. The radio was connected to
an AISIN GPS receiver purchased surplus as well as to a custom controller
for triggering transmissions. These three objects were mounted in the now
empty battery compartment.
With
this much equipment in the battery compartment there was no room to mount
a battery with the equipment. We eventually mounted a 7 AH battery on the
back of the scooter with Duct Tape. [If we had been allowed to make major
modifications we could have fit the battery in, but our sponsor wanted
to give the scooters to his children after the demonstration]
The
D700 front panel was mounted on the handle bars, along with the GPS antenna.
A small magnetic mount was also mounted on the handle bar column.

With the
D-700 in POSITION mode, this made the scooters the ultimate toy with the
GPS based speedo function. Several people we showed the scooters to believed
that we should just sell these and make a killing ñ even more so when they
realized that they would know where their children were at all times.

In order
to track the scooters in near real time, we needed to have the D700 transmit
at least every 2 to 3 seconds. Every second would have been better, but
every 2 to 3 seconds was acceptable. Unfortunately the quickest beacon
rate of the D700 is 10 seconds, which is enough for most applications,
but not ours.
The
D700 radio has a GPS port for parsing GPS data in many formats. In TNC
mode, there is a command called LTMON which allows the GPS data tobe
monitored automatically on the serial port. For instance when the command
LTMON 3 is issued, GPS data will be sent to the serial port every three
seconds.
The
GPS data is returned in a string starting $PNTS, a proprietary format designed
by the makers of the chipset in the Kenwood radio. Since our application
was for customized receiving software, any line starting $PNTS was simply
sent over radio using converse mode.

We implemented
this using Rabbit Semiconductor microcontrollers attached to their development
boards. In a production environment we would probably choose a different
processor.

The
receiver was a Kenwood TM-251 radio connected to a Kantronics KPC9612 TNC.
Since we were only receiving at 1200 bps, both these pieces of equipment
could have been downgraded but allowed for reconfiguration if required.
The
TNC was connected to a 150 foot CAT-5 serial cable onto a stage where the
demonstration of this technology was taking place.
In the
field,a D7 handheld with internal
TNC was used to monitor the performance of the scooters so that we could
fix any problems. After operating perfectly for a few days before hand,
we actually needed to reprogram one of the TNCís just before the demonstration.

The
server was responsible for reading GPS data from the rs232 connection,
processing the input stream and separating the two streams of data. The
software also moved the GPS coordinates into the coordinate system used
by the 3D model ñ by stretching, rotating and scaling the coordinates.
It also acted as a TCP/IP server for clients to connect to.
We extended
this a bit during testing when we found that GPS data was not a perfect
match for a small vehicles on a short race ñ so we placed a model of the
path into the server as well. This allowed us to use least squares approximation
to find the closest point on the path to the GPS data if required.
It also
allowed us to build extrapolation for the GPS data to remove the jerks
in movement ñ which is important when video moves as 30-60 frames/second,
and the GPS data was arriving at 3 second intervals.

Having
a server allowed us to run more that one client displaying the graphics.
This was important since we were beta testing hardware for the highest
performance. It also allowed us to tune the incoming data to the format
required by the graphics engine client software. We could also play back
GPS data to the clients in case of system failure.

For
each valid data point, the server processes the data and sends to the client.
The
client, programmed in C++, allowed for dynamic control of the viewing location
with the keyboard and mouse. The controls included pan, tilt, zoom etc.just
as if this were a real camera. The client also stored a copy of the 3D
database as well as the Maya 3D real time graphics engine.
This
software required a copy of the 3D model on the local PC to improve processing.
The software that we wrote has the potential to revolutionize the GIS industry.

Figure 2
– LA before zooming into the venue

Whilst it is outside the scope of radio, creating a 3D model of the area is probably the most important task of this exercise. I am detailing it here to give an idea of the sheer amount of work involved at the moment.
The first step was to commission some aerial photography, of the whole area of interest in general, and closer up images of the area of the demonstration. These photographs were provided as large (200+ Mbyte each) TIFF files. Using the 3D Studio Max and Maya we were able to create a seamless transition so that when we zoomed into the area of interest, the higher resolution image was inset. Figure two shows these files.
Although this only created a 2D representation of the area, looking onto the map side on did look 3D until zoomed in close. This is when the magic really happens.

With the 2D representation as a backdrop, the REZN8 artists created a 3D model of the local area by hand. This involved adding everything from roads to buildings and letter boxes.

This work was assisted with lots of photographs taken from ground level as well as some artistic license. This sort of effort is quite labor intensive, and not the sort of task to be undertaken lightly.

When we started analyzing the problem of viewing the data we came across the height information from the scooter ñ or more correctly found that the GPS sentence that we were using did not contain height data. Upon analyzing the problem, we worked out that the height data was not useful to us anyway.
The height data from GPS contains a higher error than the latitude and longitude. More importantly, in most cases when visually modeled, the height data needs to be the most accurate. It is not easy to tell if an object is one meter too far to the left or the right, but it is very easy to tell if they it is one meter off the ground, or embedded one meter into the ground.
When we thought about the problem, there was one obvious solution ñ we should always have the moving object at exactly ground level. Since scooters do not fly despite what you may have seen inëBack to the Futureí, this was perfect.

The GPS receivers that we were using performed extremely well in most cases. However they do not like to change hemispheres of the world without a hard reset. We spent well over an hour on top of a Hollywood car park before discovering this. 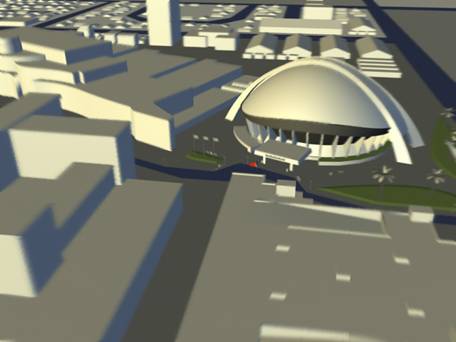 Figure 3 – Local area with single object being tracked near the entrance to the dome building.

Our demonstration of this technology was successful, with all those who saw it leaving very impressed. We have once again shown that the resources needed to produce the type of graphics described are significant, even on such a small scale.
Having said this, we believe that it will soon be possible to integrate real time 3D graphics with real time GIS data from systems such as APRS without having to dedicate so many resources.
We have shown what is possible. The challenge now is to improve it and decrease the cost.

<![if !supportFootnotes]>[1]<![endif]>
REZN8 is a Hollywood
based studio specializing in visual effects for film and television, commercial
production, internet design and programming, interactive presentations,
as well as hardware and software
integration. For more information visithttp://www.rezn8.com
<![if !supportFootnotes]>[2]<![endif]>
Radioactive Networks is an engineering consulting based in Sydney Australia.
Specializing in wireless networking solutions.