Radioactive Networks worked on the 2002 Ironman World Championships in
Kona, Hawaii in October 2002 – working with
Lateral Linking Broadcast
. Our responsibility was the tracking lead and
chase male and female competitors after they had finished the swim leg of
the race 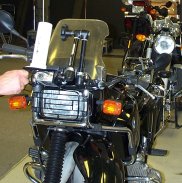 Radioactive Networks built up a number of GPS tracking units connected to
mobile radios. These units were placed on motorcycles which tracked the
athletes as they completed. Several times a minute the GPS data was sent
from the motorcycle and through our wireless data network.

The wireless data network in turn repeated the data and broadcast it to the
entire race course. We had a number of receiving stations on the course
specifically to monitor the status of the race.

Once the data was processed, it was placed onto a background map showing the
course and any local landmarks. This entire map was then placed onto the web
every 60 seconds.

All in all the event worked well. Radioactive Networks is already working on
some improvements for next year’s race, and for other events. The AntiTracker
product that can be found elsewhere on this web site is just one of the
items we are developing for this type of event.

Putting on an event like this does not need to be expensive. If you have the
application we would love to talk to you about what we can do for you.