Radioactive Networks have two Satellite options depending on the cost operational requirements for the solution. Our delayed satellite solution is ideal for cases where cost is more important than the latency of the data. At under five cents per position update, our delayed satellite solution may be for you. This solution relies on a constellation of about 30 satellites to accept your position report and down link the data as soon as it can. 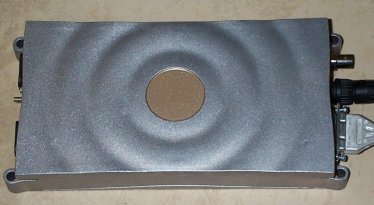 Because of the locations of the base stations, this may take 2-3 hours for the position report to come through. We have another solution where the position reports are available in under five minutes. Satellite Tracking of GPS units is now a reality world wide. Radioactive Networks have scoured the world and found a GPS tracking unit that will actually work world wide without costing the earth. This is thanks to ‘Store and Forward’ satellites that have been launched to create a world-wide system of low earth orbit satellites. 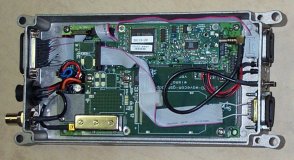 This satellite transciever can send and receive position reports as well as email and weather updates. The unit is only about 20 cm wide, and is IP68 rated. This unit really is quite well made – suitable for most demanding environments.

These pictures show the satellite footprints all over the world at one instant. You will firstly notice that there are a lot of satellites displayed. If you look closely you will notice that there is not much of the earth that is not covered by at least one satellite footprint. Since all the satellites are moving, the areas without coverage are also moving, meaning that it is generally never more than a few minutes until coverage exists.

Once a satellite is overhead, any messages are uplinked and downlinked. Depending on where the units are with regard to a ground station it may take two hours for a message to be downlinked. 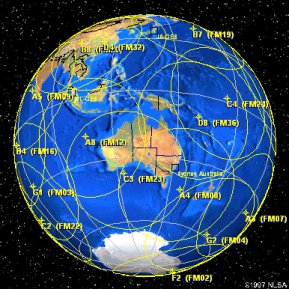 When choosing a supplier you should ask what experience the company has in the area. Radioactive Networks key staff have built and operated satellite base stations from scratch, and keeps in close contact with a number of satellite designers and builders.