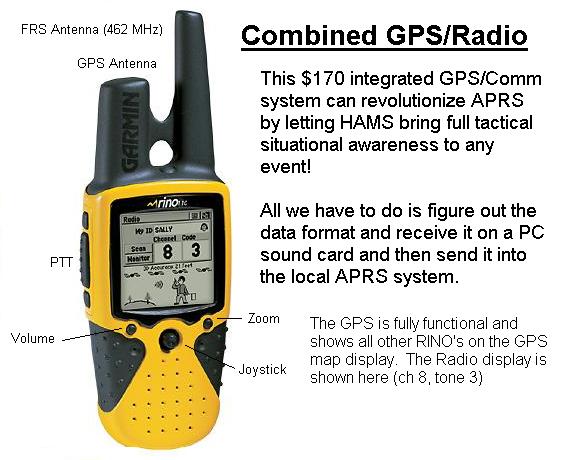 Steve Bragg, KA9MVA, has managed to download ‘hidden’ waypoints from the
RINO onto his PC without user intervention. This leaves the way open to
integrate the RINO into the APRS data stream. You can find out more at http://www.hamhud.net/rino-frs.html

We need help! The Garmin FRS/GPS radio would be a fantastic addition to
the tools available to APRS operators in support of public service events if
we only knew how to get the RINO data being transmitted over the air into APRS. Then we
could decode the positions of all such handhelds at an event and integrate
that data into the
APRS Tactical Map displays and other
HAM radio communications systems. We have written a
SPEC on how we would integrate
the position information heard from a RINO into the local APRS network for
the event.

APPROACHES: There are two approaches:

NEW MULTIPLE WAVE FILES:
With the progress being made by Darryl, Byon and Brent, here are three 60 second WAV files
recorded via the speaker jack on another FRS radio under the conditions as shown.
[The waveforms here are drastically alterted from the original off the Discriminator
so these may not be at all useful]. I had two RINO’s and alternately pressed PTT on each so as to get some data
every 5 seconds (instead of every ten). In all cases I alternated between the two radios.
One has the callsign of AJ and the other has BOBS1. AJ’s has the FIRST icon available in
list and BOBS1 has the last ICON available. The general location of the tests were
38deg 59 mins north and 076deg 29mins west.

Play for a full minute. If someone wants to extract all the DEAD TIME between bursts
and combine these files into one WAV file, go ahead if it would be useful for testing…


The
If you are successful, contact me at WB4APR@AMSAT.ORG.


Can anyone take this ASCII text A/D file capture and turn it into a WAV file
so we can distribute it as a clean WAV file?


Note: they may have dropped some
bytes in the LAT/LONG since these FRS radios only have a range of about 2 miles.
Maybe they don’t even transmit the Degrees of LAT/LONG, but only transmit
the minutes? But we do have some one reporting a 20 mile DX contact, so they
have to have preserved at least all the minutes…