Track camera positions on the your camera’s audio track

On the camera, a small device (pictured above) is required to interface the
GPS to the camera. This device will constantly store the GPS positions on
one of the audio tracks of the camera. Our device plugs into almost any GPS
receiver, and has an audio output that can be plugged into one of the audio
channels of a Video camera.

What sets our system apart from others is that we do not place the position
information on the screen, but store it on one of the audio tracks.
Whilst most video cameras have two or four channels, there is rarely any use
for more than one channel.

CamTrak Basic contains software to allow stations to be tracked using
OziExplorer whilst a video is being played back. CamTrak Basic Player is free.

CamTrak Live contains software to allow stations to be tracked using
OziExplorer whilst a video is being played back. The audio output containing
the CamTrak position information gets plugged into the Line Input of your
computers sound card, and the software sends the information to your copy of
OziExplorer.

CamTrak Pro is similar to CamTrak Basic, except it also contains
hardware to decode CamTrak position information without the issues involved
with using the sound card. The extra hardware plugs into the serial port,
and then into the video recorder. 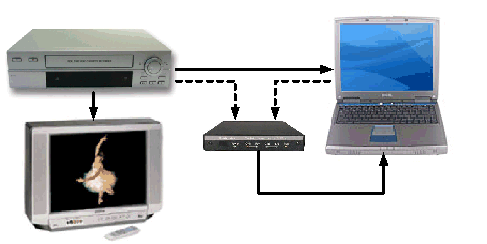 There are a number of ways to decode the CamTrak signal. In order to decode
the CamTrak data, we need to get the video and audio signals off tape. This
can be done through Firewire, video digitizing hardware or the sound card in
the case of the audio signal.

Live Mode is where the tape is played back on a normal VCR unit (or video
camera) with
the video being sent to a video screen. The Audio Track is sent to the
decoding computer, either in to the Sound Card or Hardware Decoder. In live
mode image is displayed on the TV and the map on the PC.

Recording Mode. The first step is to digitise video from the video

tape using the normal video digitising tools. Care must be taken to
preserve the video levels. Once the file is digitized to a WMV file, the
file can then be loaded into CamTrak. When the file is loaded in, the file
can then be encoded in CamTrak either using the Sound Card or the CamTrak
Decoder.

The decoding process involves playing back the video on the computer in real
time, and decoding the signals recorded on the audio track. Using the
hardware solution, the decoder is plugged into the serial port and the audio
output of the PC, and the data is saved with the WMV file.

Video Tapes that have been recorded with CamTrak can be edited together with
on any video editing system. Care must be taken to ensure that the audio
tracks are not edited out during the process. Following editing the video
tape can be digitized like normal. 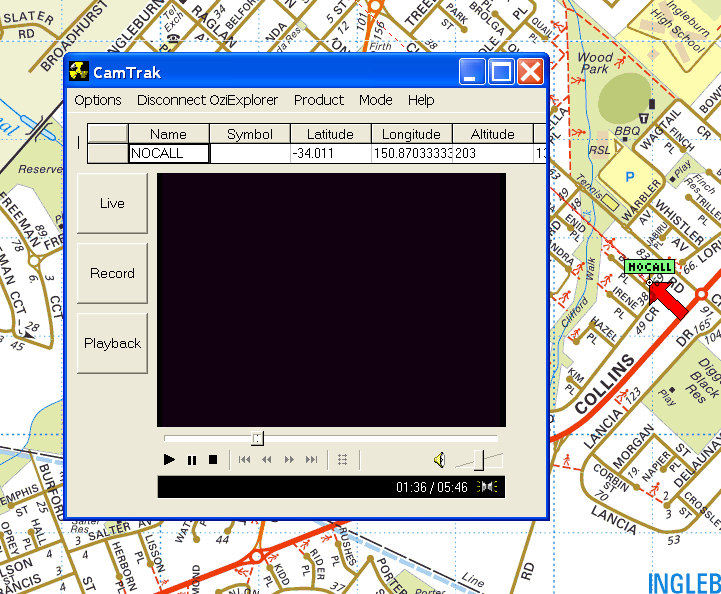 There are many other utilities available for OziExplorer. For more details
of these utilities you can have a look at
http://members.shaw.ca/davepatton/software.html