BIG companies run the risk of losing millions of dollars through hackers breaking into their wireless computer networks and gaining access to sensitive information, a computer expert warned yesterday.

This meant anyone with a laptop computer and a wireless card could hack into the wireless networks – potentially gaining access to information about financial records or research.

Mr Barrie said yesterday many people who used the wireless computers for business were not too concerned about going through security protocols.

“It’s good technology – the problem is people have adopted it en masse without thinking too much about security,” he said.

“Because the technology is so easy to use, the people who benefit the most from it tend to be the least technical.

“If the computer is to be used by a number of different people, it can be a hassle to have to go through security protocols.” 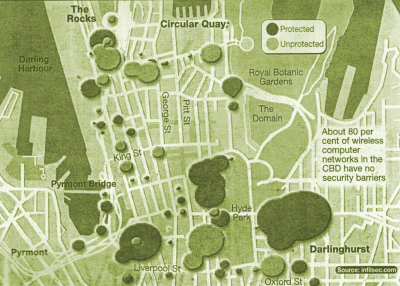 People often did not change the computer from its default security configuration, making it easier to break into.

“On a live network, each of the access points puts out a beacon, saying ‘Hi, I’m here’. Most of the networks that are out there will allow you easy access.”

Users put information on wireless cards which they plug into the computer, allowing information to be moved from computer to computer.

Infilsec’s survey found 15 per cent of the unsecured networks used their organisation’s name as the identifying mark.

About 28 per cent of companies used the default identifier provided by the manufacturer of the computer technology.

“By the time they put the computers out with WEP included, they realised it [the security system] was broken,” he said.

“Some of the big companies are aware of it,” he said.